After wanting to cook some Texas BBQ and seeing the price of offset smokers here in the UK I decided to embark upon a project to design and build my own from scratch.

Back in Spring 2021 my family, my wife, and I decided to put our money together to purchase a new BBQ, an Outback Jupiter Hybrid. I really enjoyed getting together with others and cooking outdoors, which quickly grew into a desire to keep trying new cooking methods, foods and experimenting. 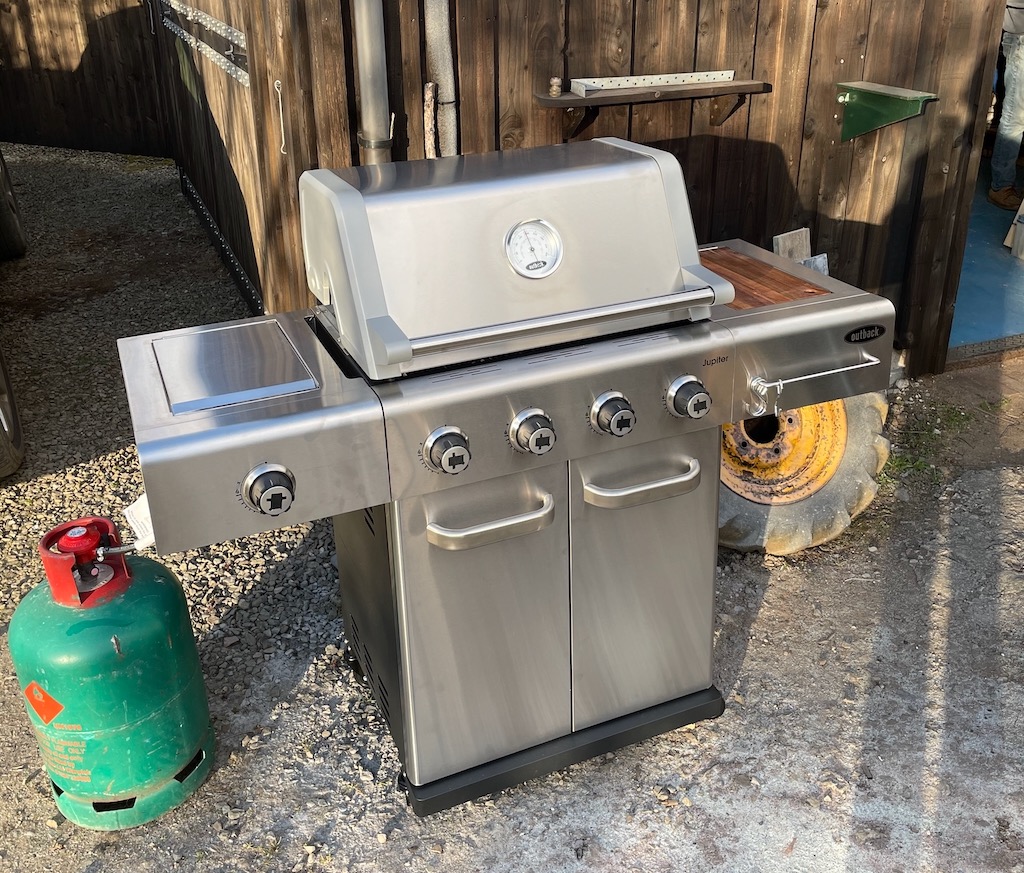 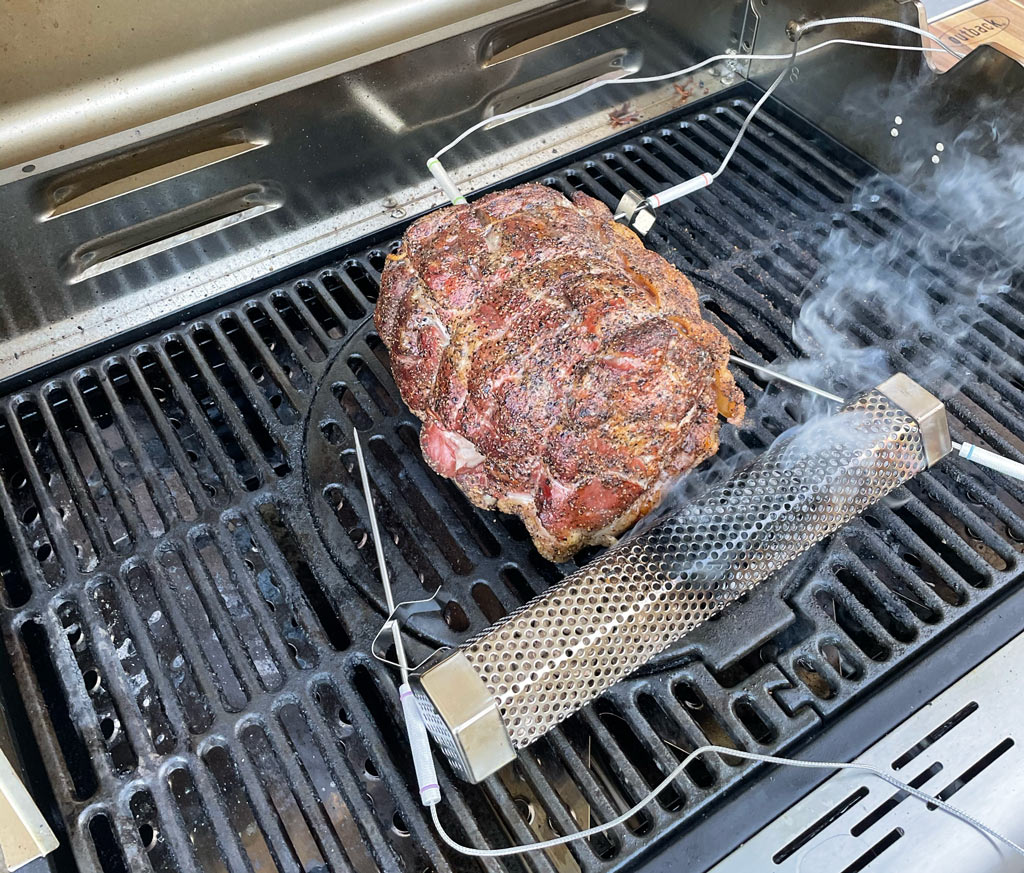 One of the first new things I tried was cooking a brisket; I had no idea what I was doing or even what meat I was buying at that point, but it was the first time and so I was excited. I cooked it low and slow on the Jupiter using only one of the burners turned down very low, along with some wood chips in a foil pouch to provide some smoke. It turned out great and everyone enjoyed it. Afterwards I learned that I had only cooked a small piece of a full brisket.

Next I tried cooking a pork shoulder, again using the low and slow method, and this time with some apple-wood chips for a little smoke flavour. Again it turned out to be delicious but I was left hankering for more smoke. I really like the BBQ that we bought and ended up getting a rotisserie for it as well, which makes an awesome chicken!

Nevertheless, I was left wondering what a brisket cooked over a real fire would be like, and so began the research. After reading the Franklin BBQ book I quickly decided that an offset smoker, or stick-burner is what I needed.

I looked around to see what was available in the UK and was pretty disappointed. Although things seem to be changing slowly, with some UK manufacturers appearing, it looked like commercially available units were either of very cheap construction or prohibitively expensive (presumably due to import costs from the US).

I knew from watching various YouTube videos and reading online, that I wanted to construct an offset smoker. Additionally, I wanted to keep things simple at this point with just a firebox, a cook chamber, and a chimney/smoke stack. There are lots of variations with reverse flow, and baffle plates amongst other design features and techniques but as this is my first cooker I wanted to keep things simple and stick to the basics. I also wanted to cut down the build time in order to satisfy my need for smoked meat before the summer was over. 😅

I found it really tough to get hold of steel tube of large diameters here in the UK, so I figured I could weld together an octagon shaped tank. I’ve aimed for 20” wide by 40” long which gives me a volume of about 54.8 gallons; 12,658 cu in.

Using the BBQ Pit Calculator I came up with a firebox size of 18” high, 17.25” wide and 18” long, which gives me a size of 5589 cu in, which, given a recommended size of 4220, that’s a bit oversized at ~130%. I’ve purposefully made the firebox width a little less than the cook chamber, so I can add insulation later if I need to.

I’ve gone for a 4” chimney, 35 inches long (based on the fact I could buy a 1000mm length) with a collector the full width of the cook chamber positioned in the centre of the chamber height-wise, with the grate level centred as well. The throat comes out at 46 sq inch and everything will be made from 6mm steel plate (~1/4”).

I mocked it up in Autodesk Fusion 360, my go-to CAD software. 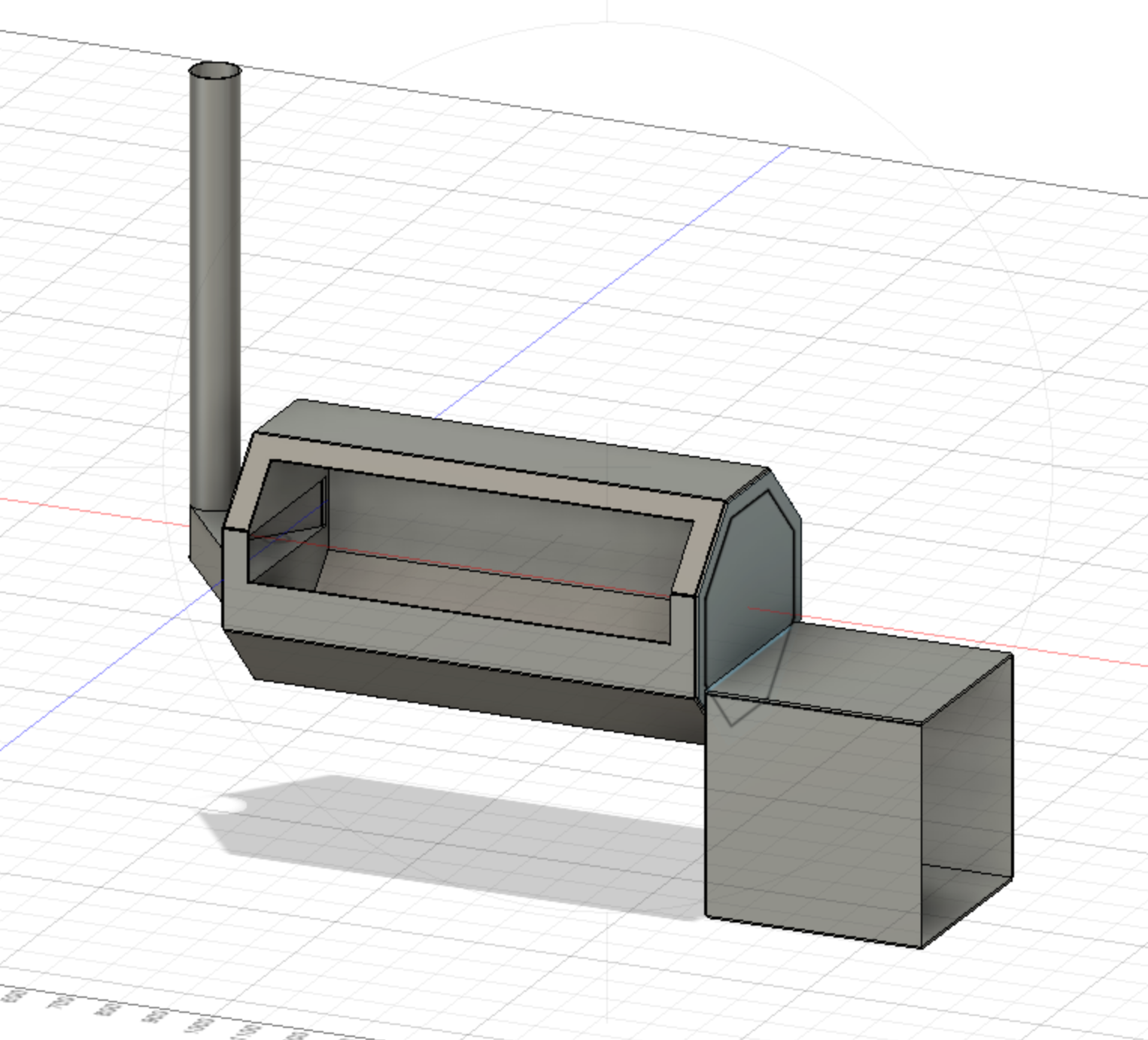 After the design mockup came the materials order. I ended up ordering the following:

This, along with a combination of scraps and offcuts from previous projects gave us enough to complete the build.